Running from this saturday (21st) to the following wednesday, not entirely sure what the times are but i'm sure they're somewhere on the hereford website.....
This is my area of the show.
My final animation is shown in the post below. 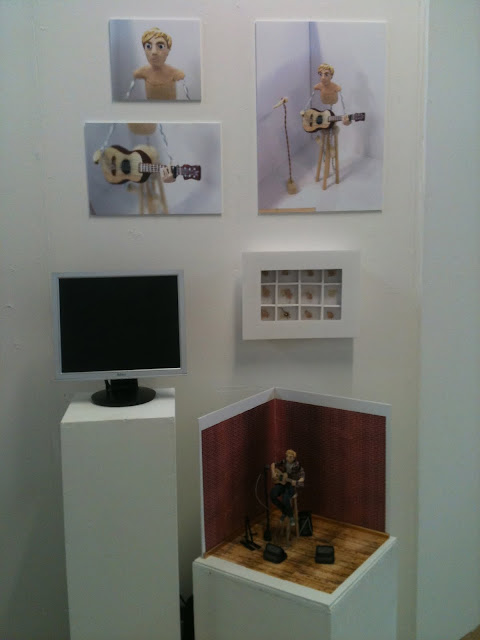 Posted by James Carlisle at 16:55 No comments:

The Wrote and the Writ

This is my final video, the summation of my foundation year. Many thanks to Nick in IT for helping me edit it. I wish i'd had more time to animate speech and increase the length.

Posted by James Carlisle at 09:49 No comments:

Filming is now done. I'll put the video up on here on Friday or Saturday after the start of my college show
Posted by James Carlisle at 20:33 No comments:

I had planned to start filming a week ago (27th of april ish). In doing some test shots, i realised just how much the character and the guitar moved when the hands were altered. On a small scale this wouldnt be too noticable but as it was it did not look good. 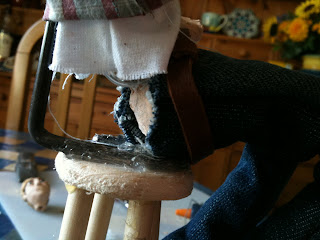 (ignore the head in the background) 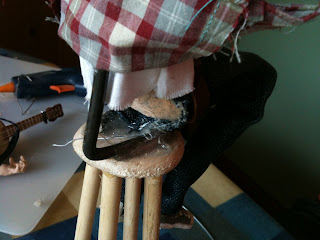 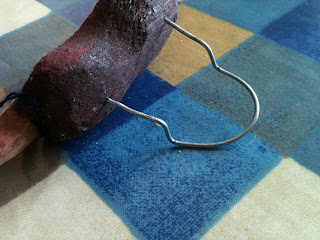 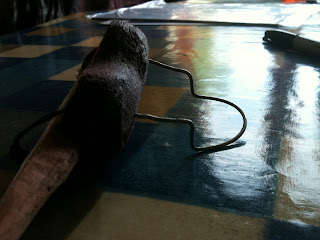 The above is how the problem was resolved. A metal loop was attatched to the base of the seat and glued up the models back, up to around where the shoulder blades would be. It was then secured by glueing the jeans to the same loop, overall attatching him to the chair.

The guitar movement issue was sorted by attatching a 'loop' of metal into the guitar, around the back (glueing onto the recently attatched support) round the other side and back into the guitar. It has not been glued to the guitar as i didnt want to if i could avoid it.

I could now start shooting.

I've also accepted my offer to study animation at the University of Glamorgan starting in September
Posted by James Carlisle at 11:20 No comments:

The first two photos show my character as it was when i brought it home for easter. I had planned to begin shooting my film in the first week, but due to my room being uneven, everytime i walked from the set, to my laptop or anywhere for that matter, the room would shake slightly and the camera would move.

I decided to relocate to a different room (which i couldnt do until the following tuesday due to having family round, this worked out nicely as i got to spend more time with them and less locked away in a dark room). 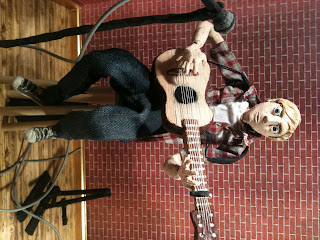 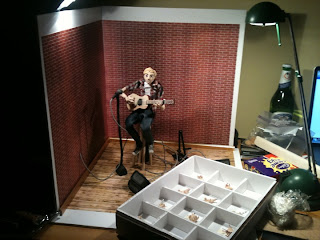 This is the relocation, looks the same but its the opposite end of my house. In the week i had off, i remoulded the wrists of the 12 hands and shortened the wire of them to make them all the same. I also shortened the length of the arms drastically as it looked wrong. I am incredibly glad i did and didnt just think it would do as it was. 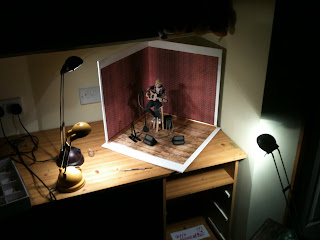 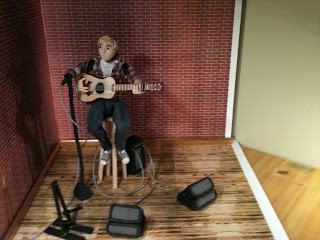 For my character to be able to play guitar, i needed to do one of two things. Have two hands (left and right) which were bendable, and stuck in a specific shape. Or make around 10-12 individual hands which could be swapped over when neccessary. As the thinnest wire i had was copper, I went for the second option and started making 12 individual hands. This is how they were made. 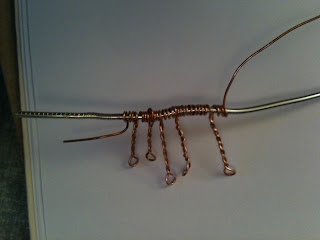 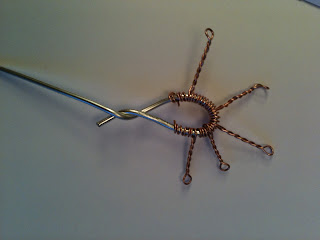 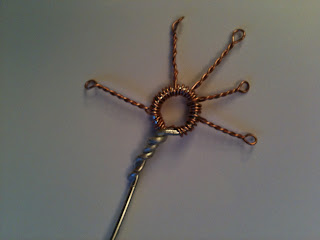 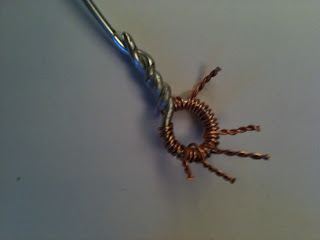 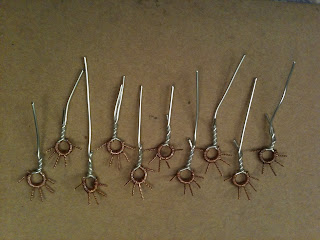 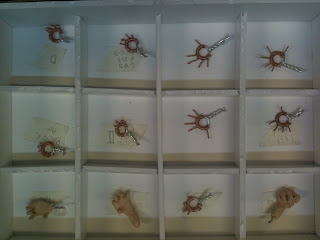 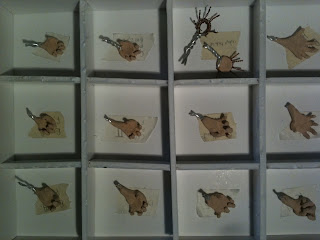 In order for me to be able to swap these hands over quickly, without having to remould the wrist after each change i have made a tiny watch to cover the join. It is also partially covered up by the neck of the guitar.
﻿
Posted by James Carlisle at 10:55 No comments:

I've been really busy these last few weeks so havent really had time to update my blog, so here is what ive been up to,

Initially I started moulding the head, eyes nose, mouth, ears, hair etc which took a lot longer than expected as i had to remould the jaw to make it look more realistic and generally alter. 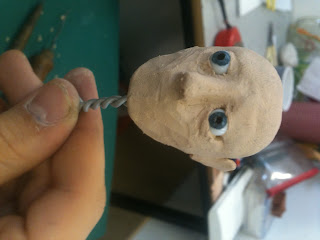 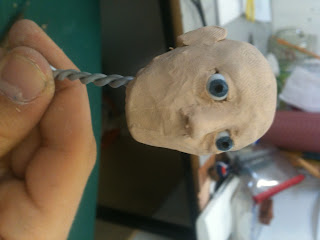 These next photos show the development of both my set (and props) and the bulk of the character. Including prototype hands and the clothes. 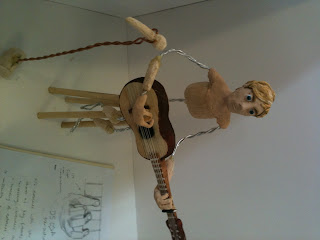 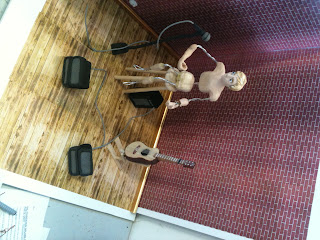 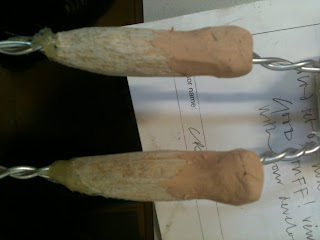 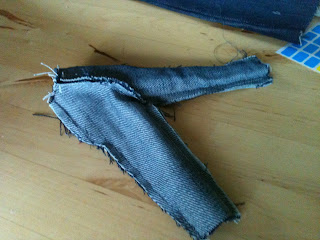 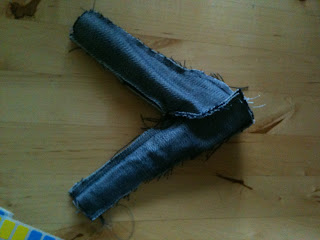 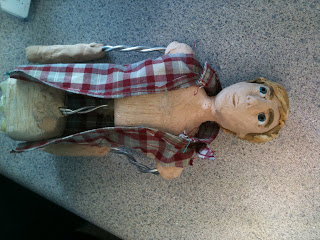 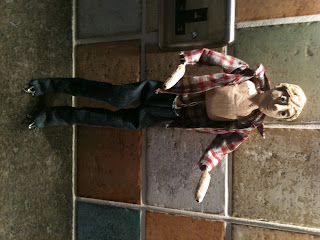 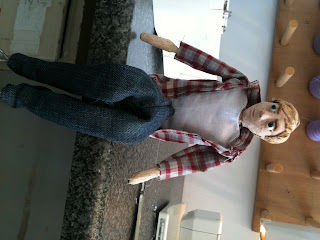 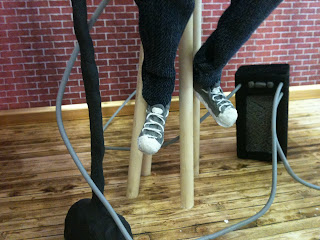 I then started (and finished) making the clothes, i wasnt looking forward to this as when i went to textiles, Ellie said it would be hard enough for someone with my sewing background to make real sized clothes, the ones i have made are approximately 1/6th scale. I am incredibly happy with the outcome. I have also made a leather belt, watch and plasticine shoes. The jeans took me a couple of goes to get an accurate leg thickness.
﻿
Posted by James Carlisle at 10:47 No comments: