Although not technically an animation company Three Stones Media are the incredibly talented people that produce Rastamouse! 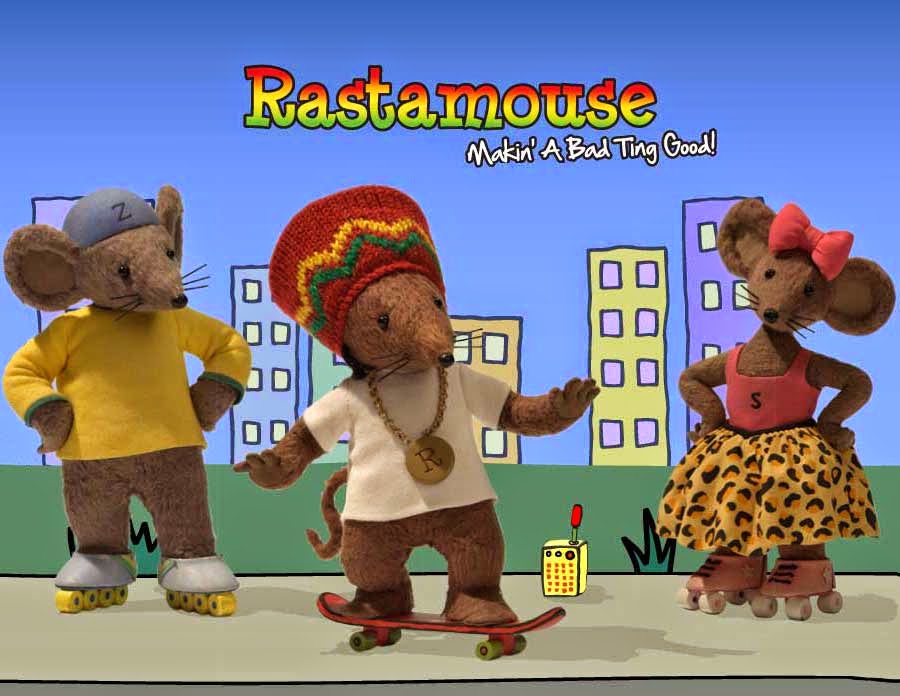 The first two series of Rastamouse were made by the welsh animation company Dinamo. Unfortunately Dinamo closed down in June 2013 whilst a third series was being developed.

I love the hand built children's TV show feel to Rastamouse with the combination of real fur puppets and 2D props and sets.

This combined with the premise of a crime fighting detective mouse whose also in a band leads to a great show all around! 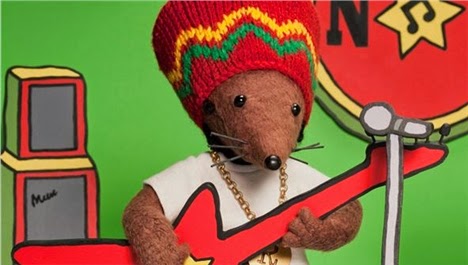 All in all i cannot wait to watch the next series and beyond that of Rastamouse and the Easy Crew.

Posted by James Carlisle at 21:48 No comments:

I am incredibly excited by this next one,

A few months ago my friend George sent me a link to a pilot episode of a children's TV show called 'Calamity Island'. I fell in love with the stylised character design and damn cute penguin.

If you haven't seen it yet, watch it here, 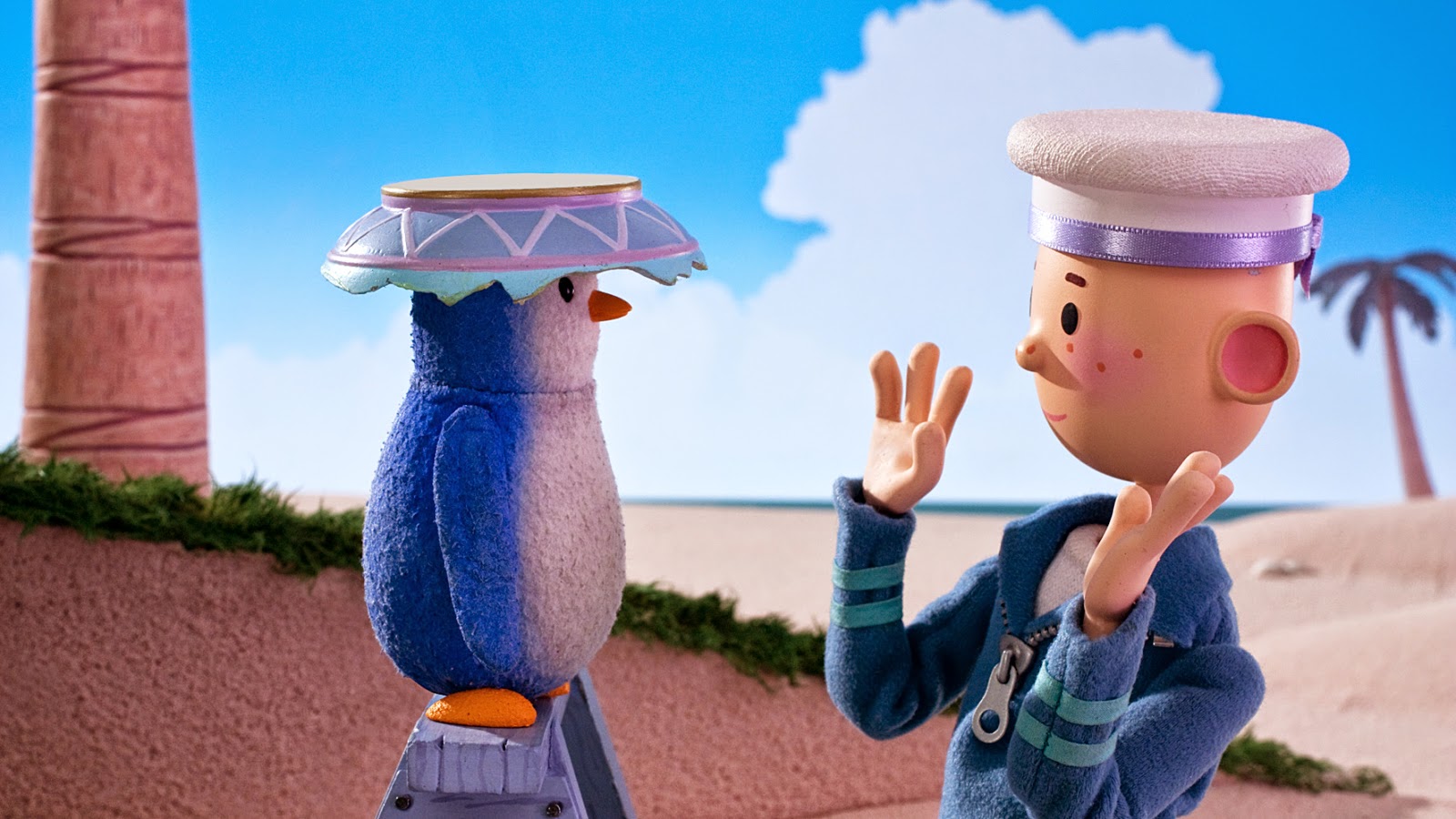 Two years ago, David Johnson of 'Famous Flying Films', creator of the hit kids TV show 'The Koala Brothers' pitched the idea and I am SO glad its been commissioned. 52 x 7 minute episodes are in the pipeline with puppets made by none other than Mackinnon and Saunders! (The same people making the puppets for the Clangers and countless other kids TV shows as well as large feature film work). 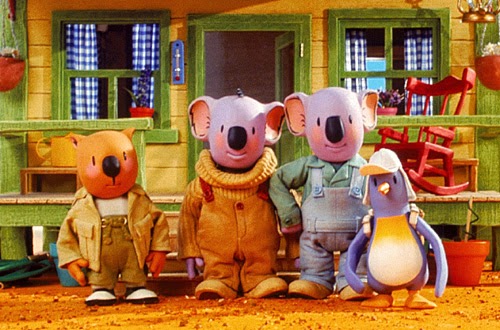 I don't know what exactly it is that I love so much about Calamity Island, maybe its the simplicity of the puppets, a distinct style that Famous Flying Films tries to stick to. But again i cannot wait to watch this series! If its anywhere near as good as the Koala Brothers it'll be fantastic!

Posted by James Carlisle at 22:43 No comments:

On to the next!

Factory Transmedia pride themselves (as the name suggests) on working across all media, through animation, television, advertising, VFX and post production. 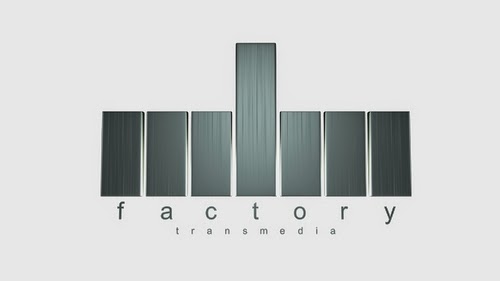 MOST importantly, the animation! (I'm bias). Factory TM are incredibly skilled in developing new talent and technology whilst at the same time assisting in reboots of old shows. More specifically...

Officially confirmed towards the end of last year, the BBC has commissioned a new series of the Clangers to be released in 2015. I for one am incredibly excited. Having been a massive fan of the Clangers growing up, potentially one of the first Stop Motion shows I ever watched, maybe along side Oakie Doke? 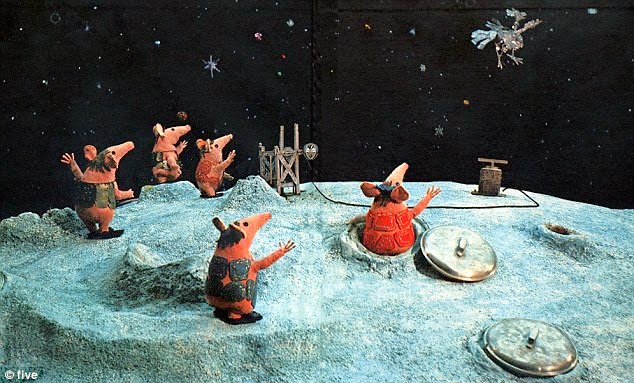 Factory TM, working closely with models from the incredibly talented Mackinnon and Saunders are working towards creating a show with a similar style to the original, but bringing it to the modern age.

Its always great to see animation companies or broadcasters choosing to recreate old shows in their original format, when you look at the likes of Postman Pat, Fireman Sam and countless others that (in my opinion) completely lose their charm when transitioned from Stop Motion to CGI. (No offence to CGI, I just don't like change).

I for one cannot wait until 2015 to get to watch all new Clangers!

Posted by James Carlisle at 23:05 No comments: 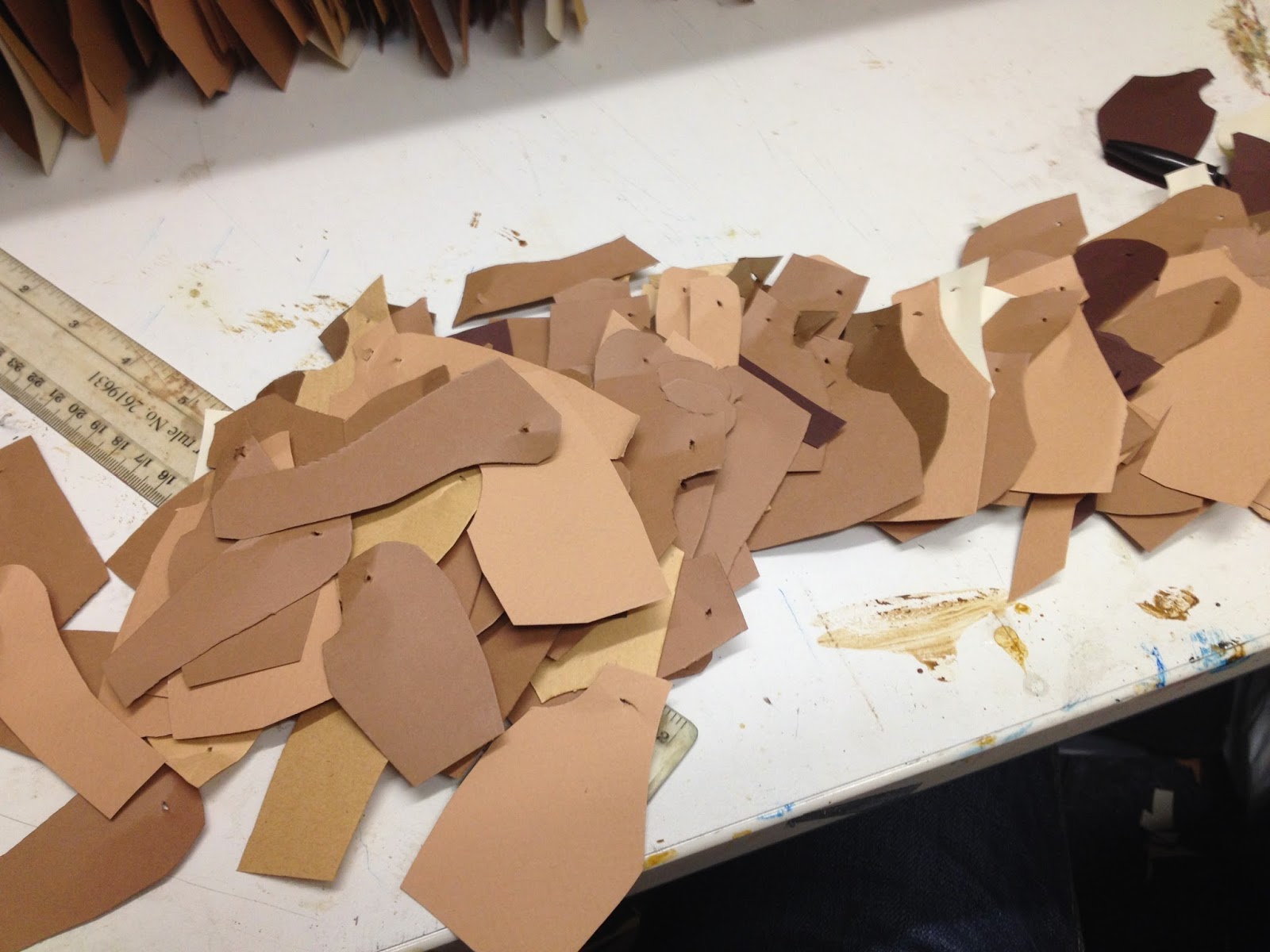 Back to regular posts to split up these inspirational companies.

The interior set!! Once the floor was down and set, I made the walls. Alongside this I cut out more miniature pattern pieces than i can count to hang between the two pillars seen below.

I wanted to keep the set as simple as possible maintaining the hand built stop motion feel. For this, cardboard was the perfect material for the walls.

I made the frames with thin pieces of wood which locked into each other and the base using carefully drilled holes, large bolts and wing nuts. 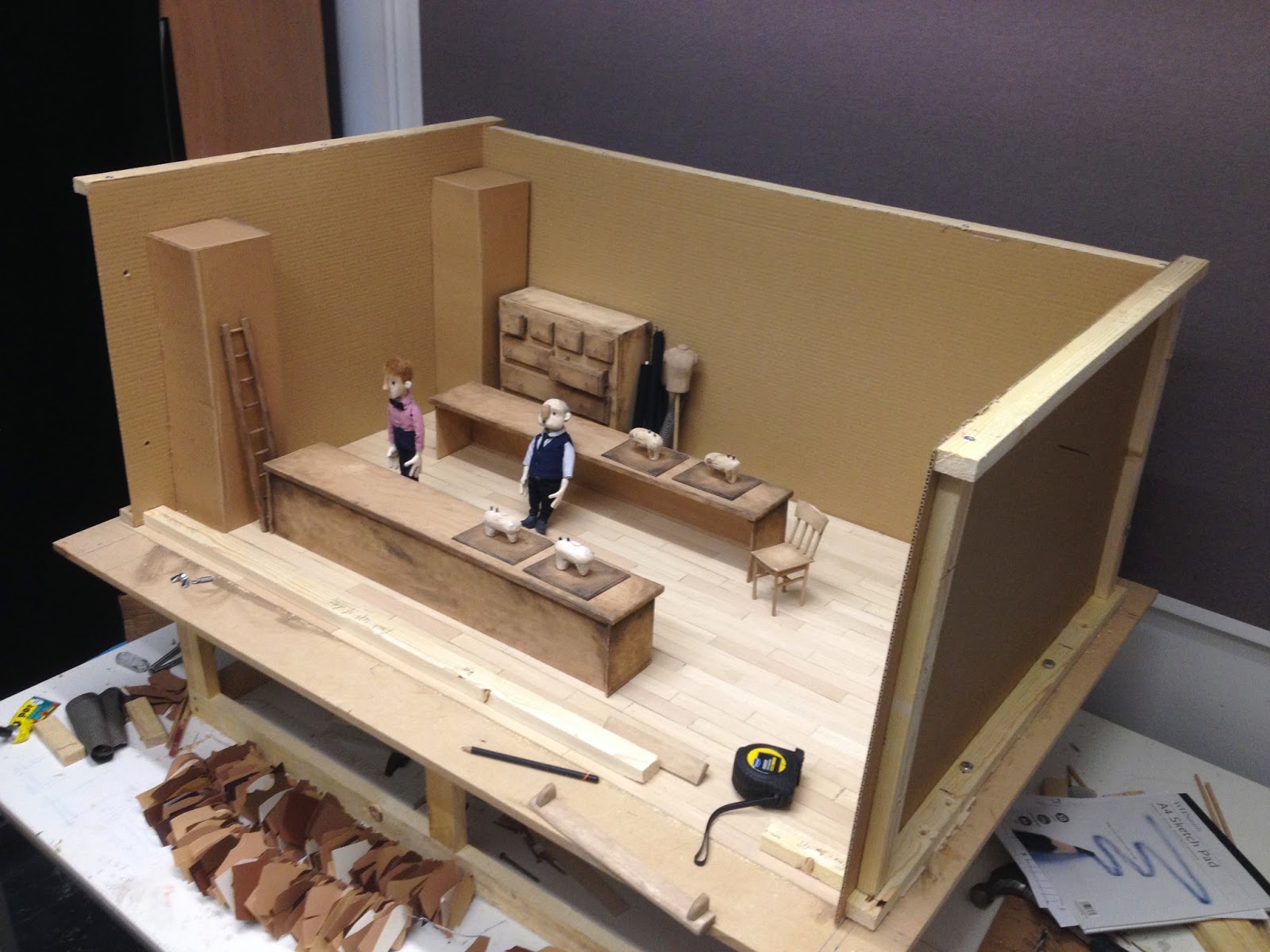 The only issue with the cardboard is the colour, it was difficult to commit to a colour at this point as everything sits in the same sepia toned theme. I tried multiple colour swatches and in the end decided (with help from twitter) on the blue. 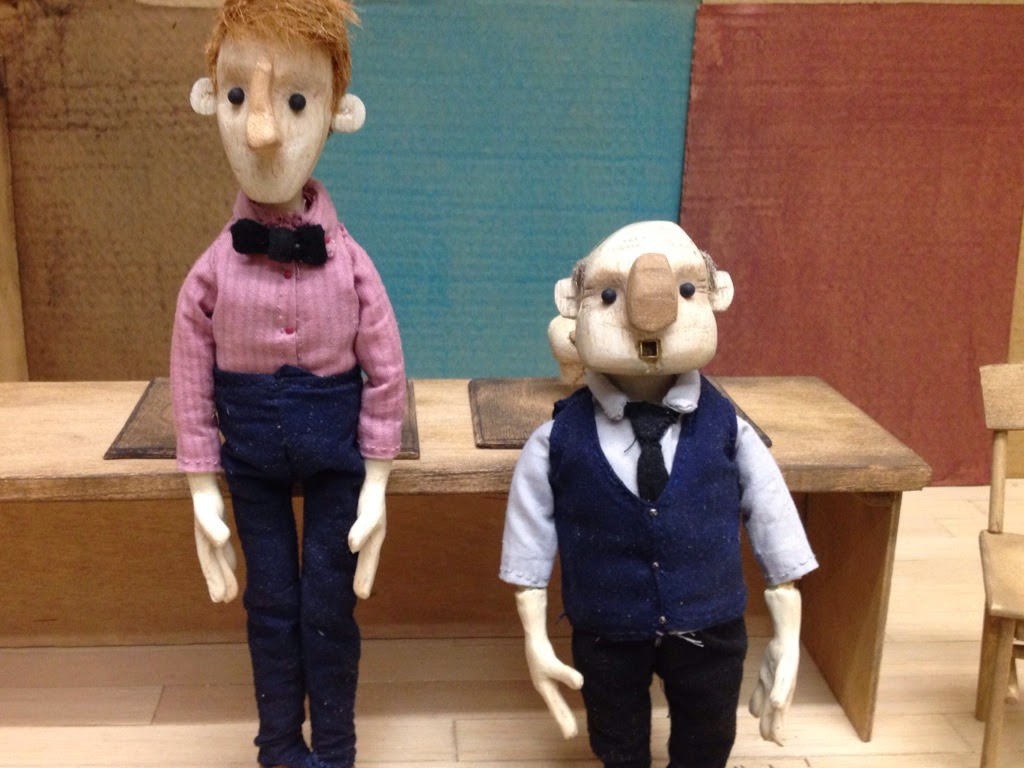 However, when mixing the final paint colour I made it slightly too dark, this combined with the brown of the cardboard showing through made for a much different colour but overall I'm still happy with it. 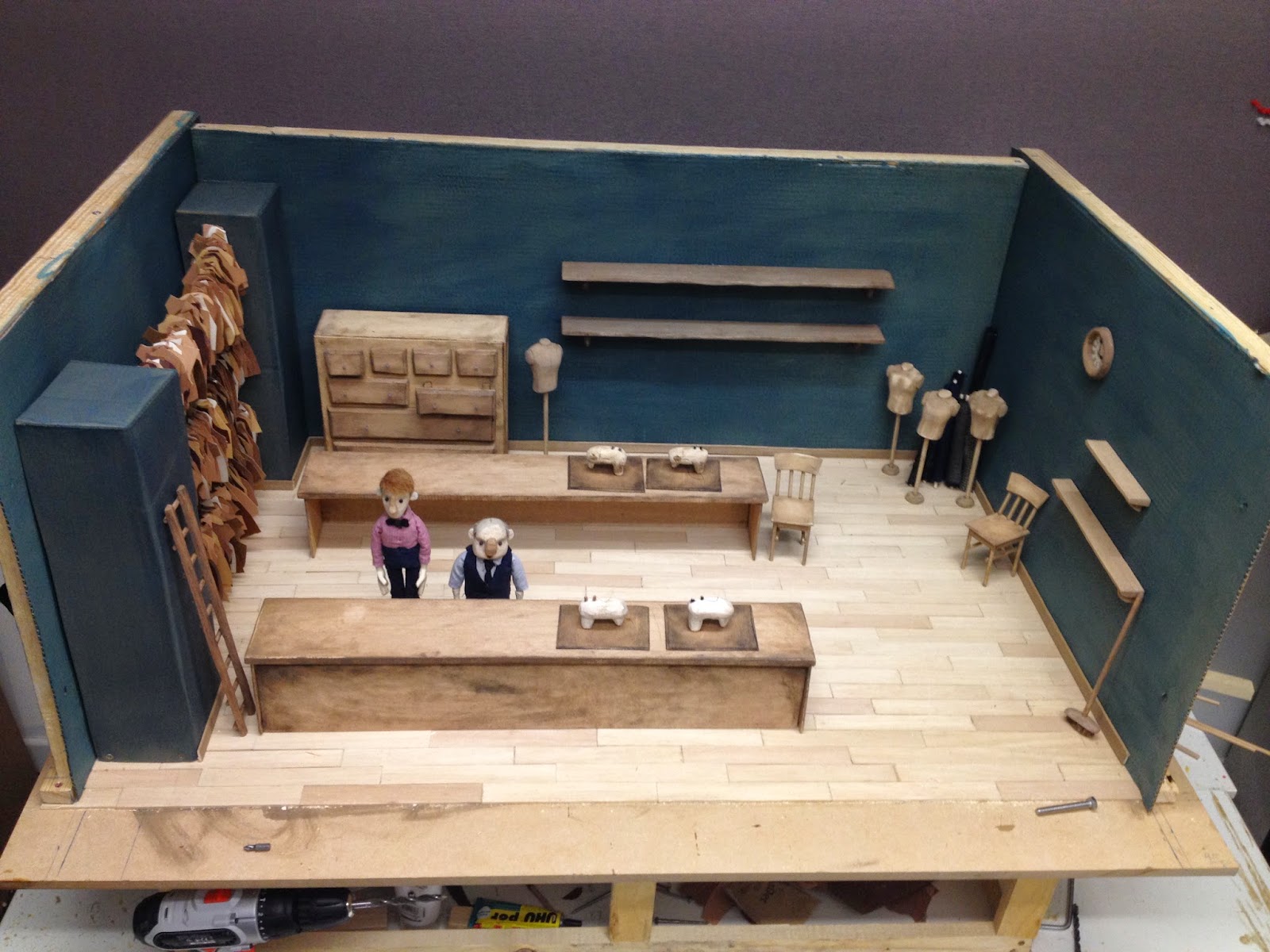 Below is an example of how the frames were made for each wall. this time in order to fit the door, which was made for my by Saeed, a 2nd year model maker. 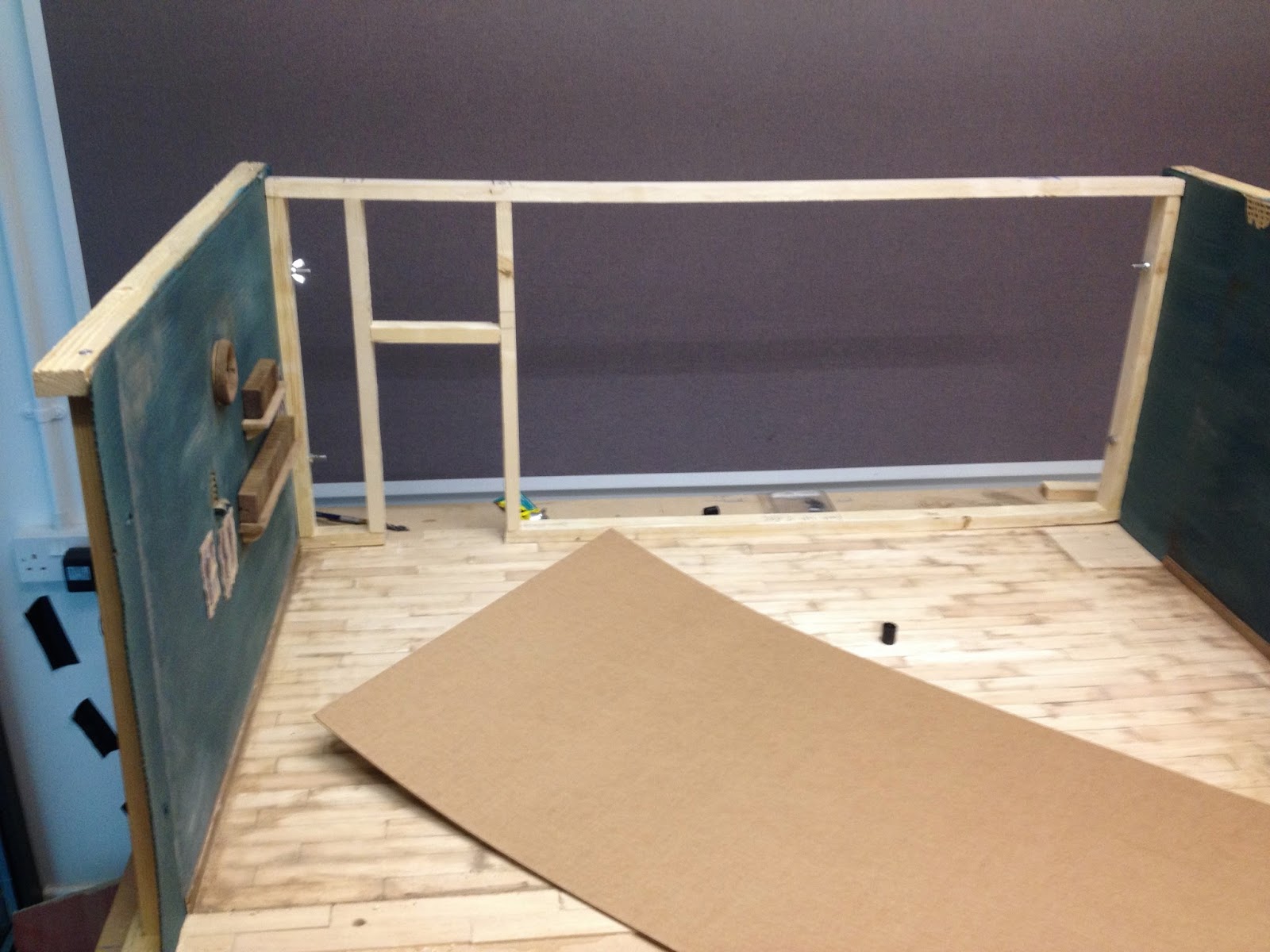 Extra props were made to generally fill out the tailors cutters. and make it look more aged and used. Fabric rolls were simple enough to make and luckily Saeed was nice enough to make some miniature cardboard boxes, visible under the table in the photo below. 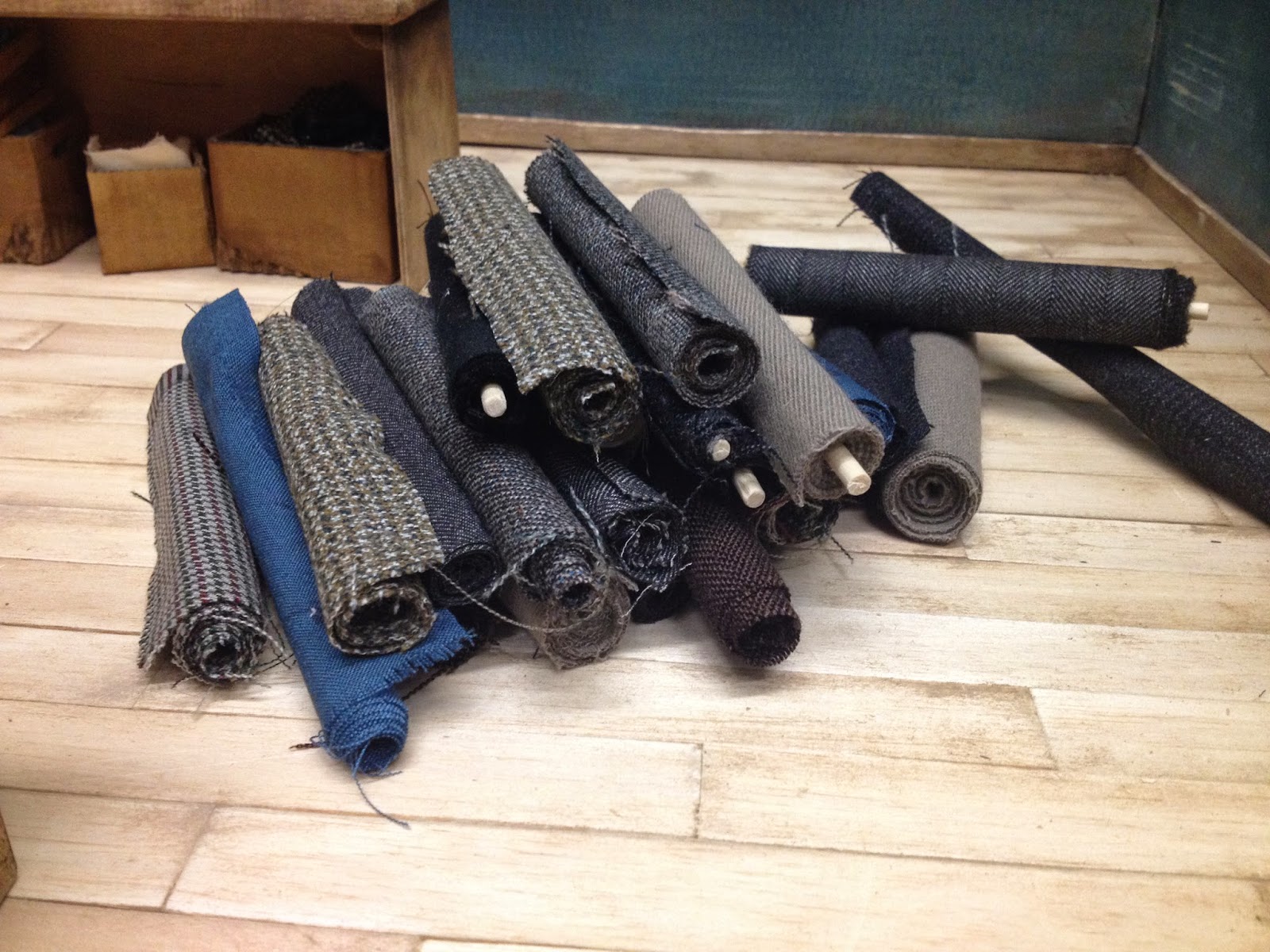 I also folded various fabrics and glued them onto a shelf to fill the blank wall space. 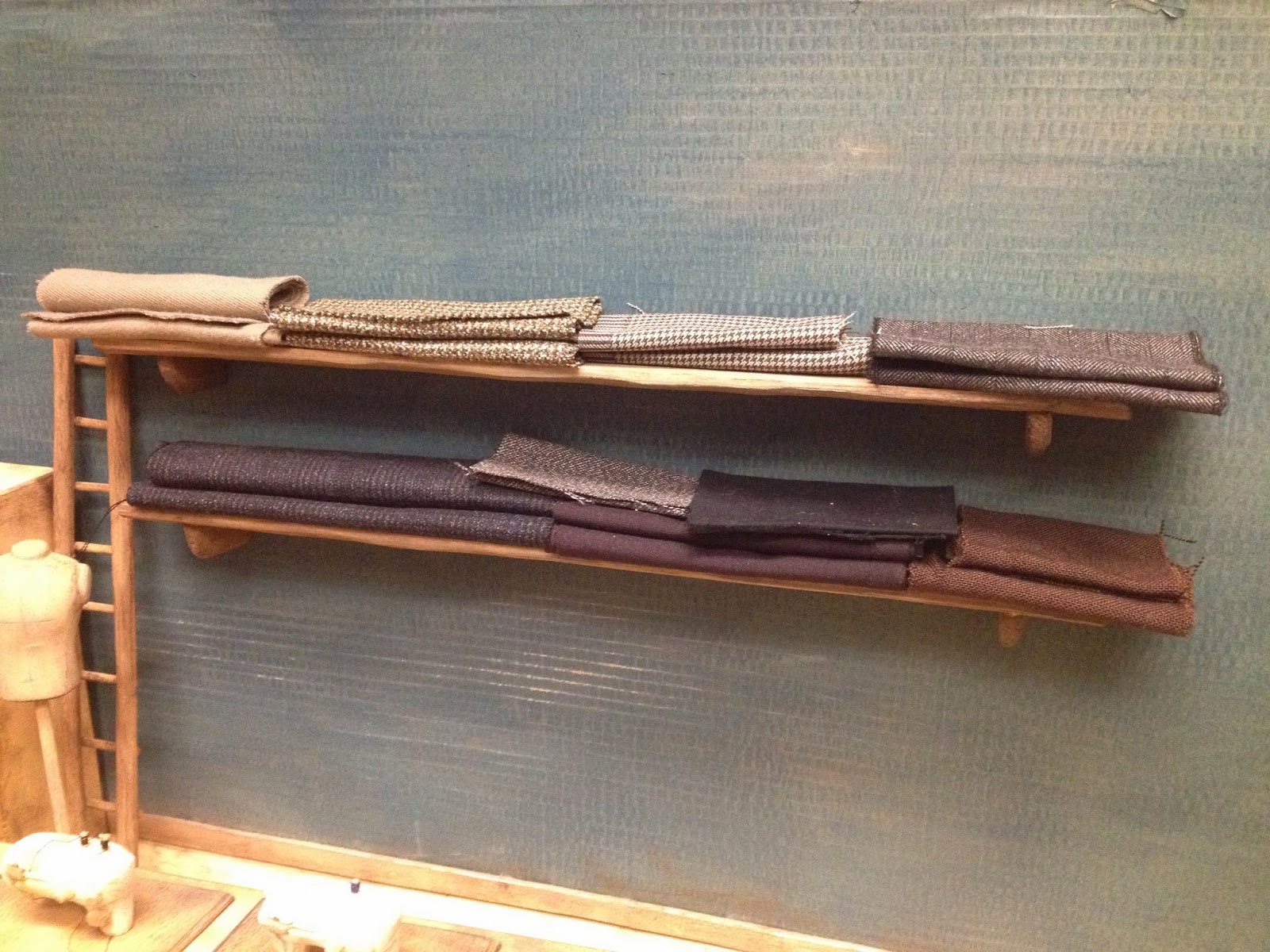 Finally the outside wall! One of the other reasons for using cardboard was that it was easy to cut out a hole in a wall to insert a perspex window.

This was simple enough to make, simply two pieces of cardboard with the same cut taken out of each, a sheet of perspex was glued between the two and balsa wood glued around the edges. The exterior wall was made by peeling off the first layer of brown paper on the cardboard, revealing the corrugated card. This was then painted a light grey. 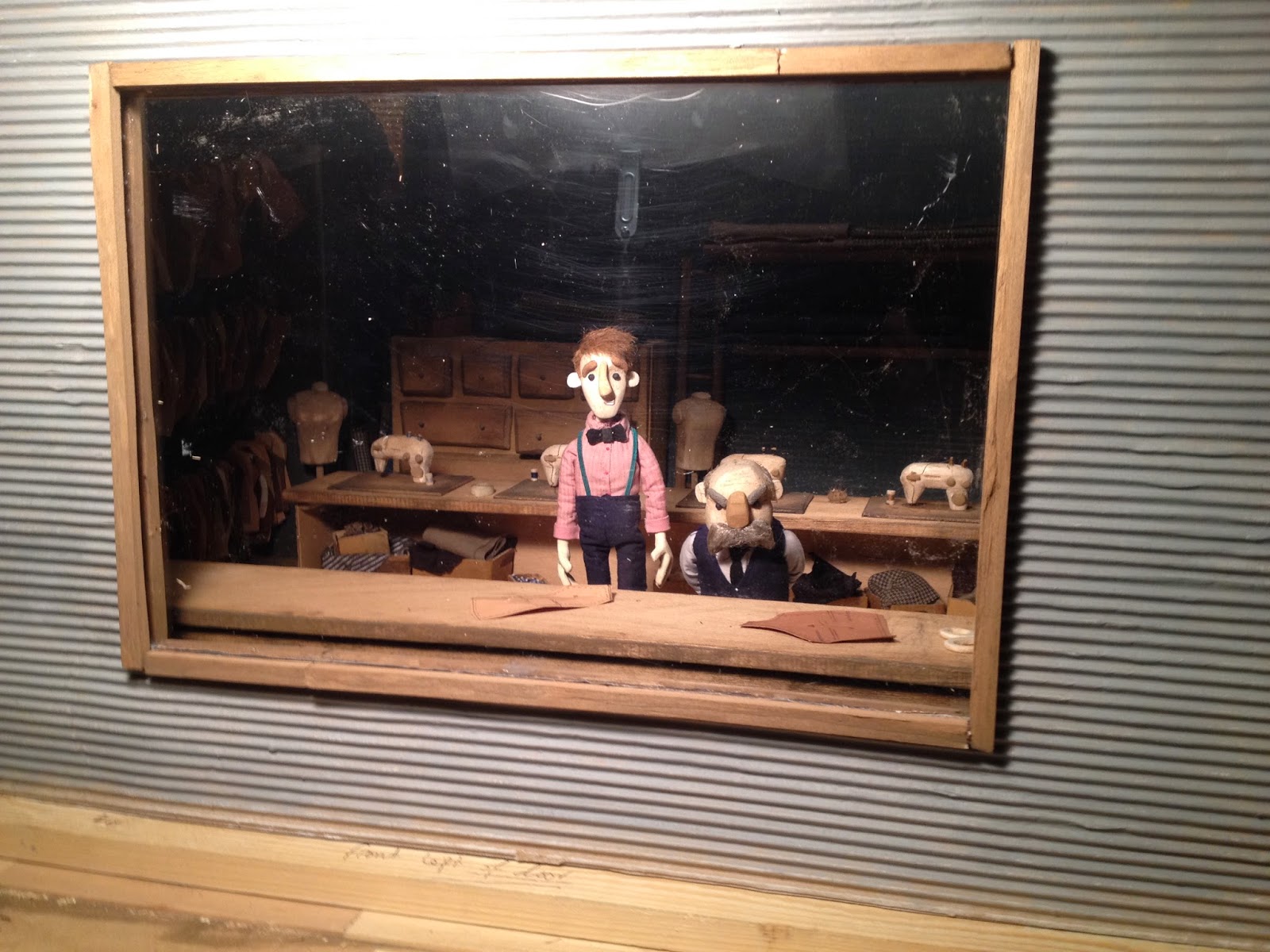 Posted by James Carlisle at 20:25 No comments:

Part 2!
As promised, a look into 'BlinkInk'

A company based in Soho London, creating breathtaking and innovative commercials, short films and music videos combining both live action and animation.

Their most recent commercial work being 'Barry the Biscuit Boy'. An incredible seamless combination of live action puppets and stop motion animation. 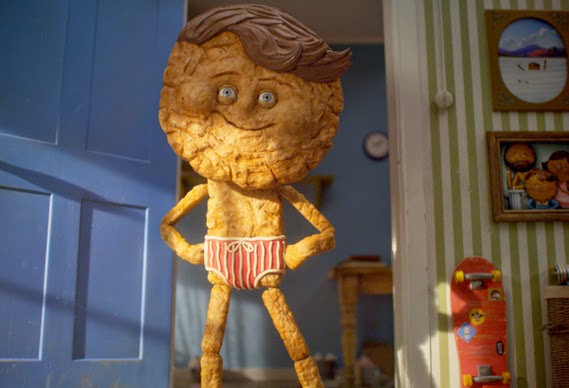 It's always great to see that companies are still working in the hand built world of stop motion animation. And even better to see Stop Motion developed into the modern world combining it with live action, 2D and CG. In a time when some people might think stop mo is dying out, its companies like BlinkInk that are helping not only to keep it alive, but to help it evolve.

As well as 'Barry the Biscuit Boy', BlinkInk were also involved in the production of John Lewis' Christmas Advert 'The Bear and the Hare'. A beautiful combination of Stop Motion sets with 2D (3D printed) characters. 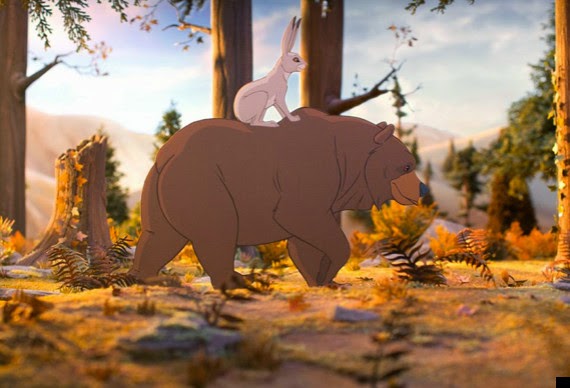 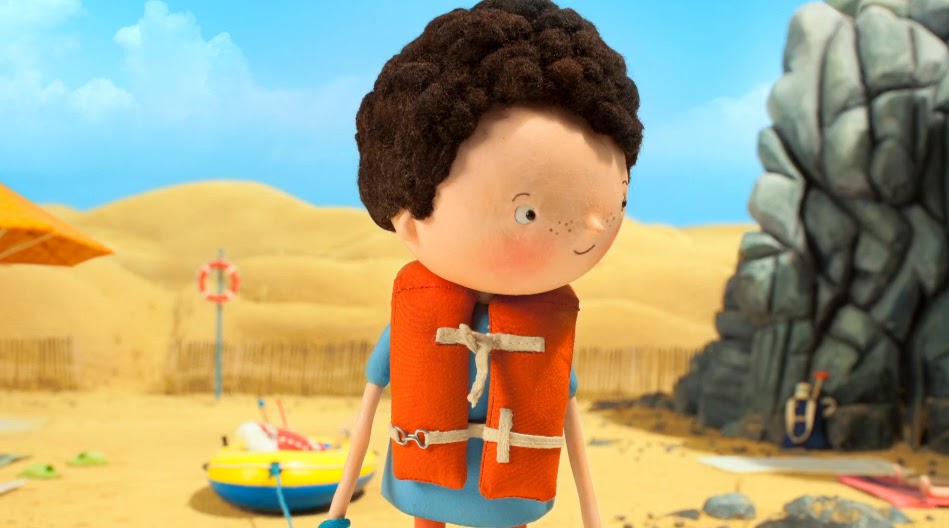 BlinkInk are also very encouraging when it comes to short films, as shown by Joseph Mann's 'Sandy' and Mikey Please' 'The Eagleman's Stag'.

Finally, BlinkInk are an inspiration due to their willingness to nurture 'fresh young talent alongside well-established directors'.

Posted by James Carlisle at 18:15 No comments:

As part of our business studies module we've been encouraged to research and write about animation companies you are inspired by, and maybe even someday be considered for work at. I wanted to start by looking at Yamination Studios.

Run by multi award winning animator Drew Roper, Yamination studios are a stop motion animation company based in Birmingham. Being from the midlands myself, its great to see an animation company set up outside of London, Bristol, Manchester and Cardiff. 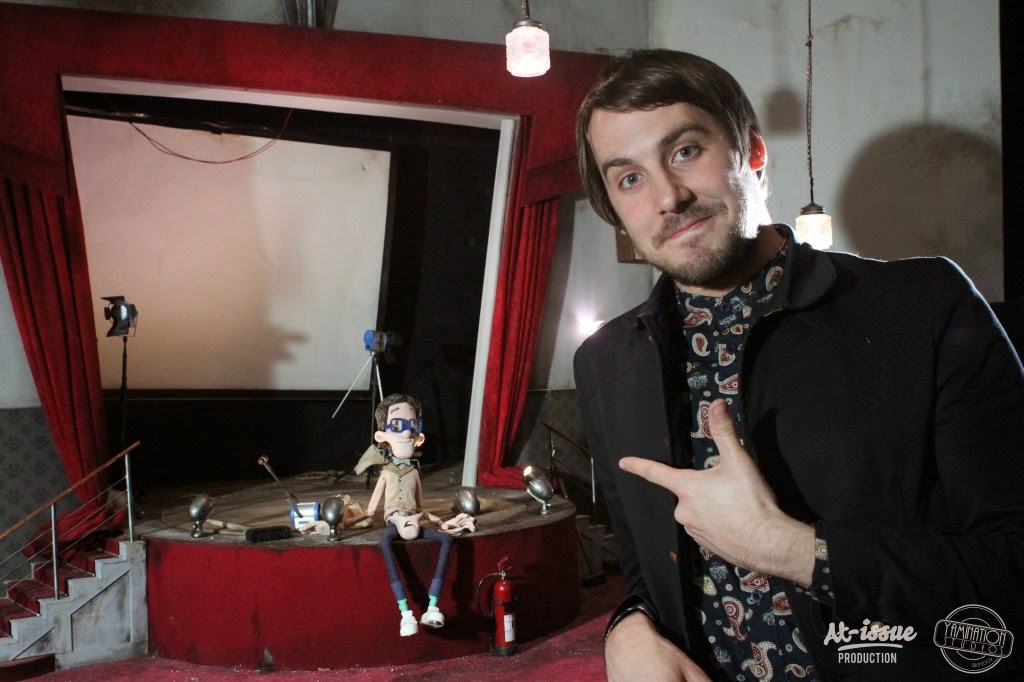 Their current project, 'At-Issue', a short film combining stop motion, 2D and CG animation through sneezing has been funded by the Sky Arts Ignition Series as well as an incredibly successful Kickstarter campaign.

I absolutely love the style of this film, using an offbeat naturalism, largely associated with Laika feature films, utilising angles in straight lines and having a great hand built quality to it. 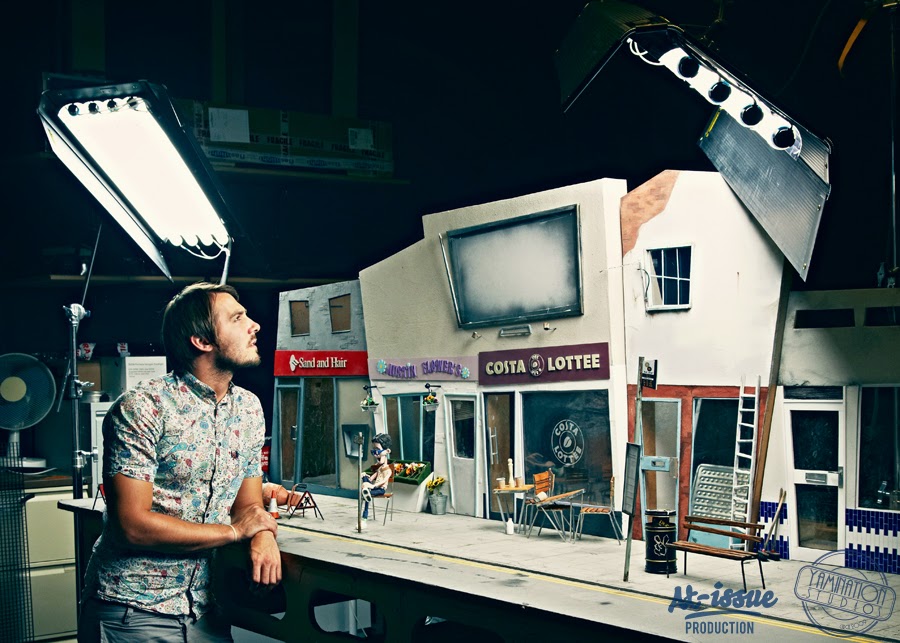 Most recently, alongside Blink Ink in London (will be posting about them next) Yamination Studios had a helping hand in the recent 'Barry the Biscuit Boy' advert for Cravendale.

Overall its great to see that you can do what Drew has done, set up your own company and be successful, receiving funding from multiple locations and gaining sponsorships from other companies.

Thats all for now! I promise i'll post about my set building at some point, don't want to spam up too many blog posts though

Posted by James Carlisle at 14:34 No comments:

I'll post again about building the interior set over the next week but for now heres a sneak peek at some of the animation!

I've gone home for easter for a few days and have put together what i've done so far and i've animated about a minute, with a little over 2 minutes left to film (as on track as i can be to finish by my deadline)

The first shot is a block out initially followed by the actual animation and the one below is the first piece i shot.

I've got a feeling i'll fall behind on blogging over the next month due to busyness BUT i'm still pretty active on my instagram account, so head on over there to see more frequent updates.

back to it come wednesday, wish me luck!
Posted by James Carlisle at 00:20 1 comment: 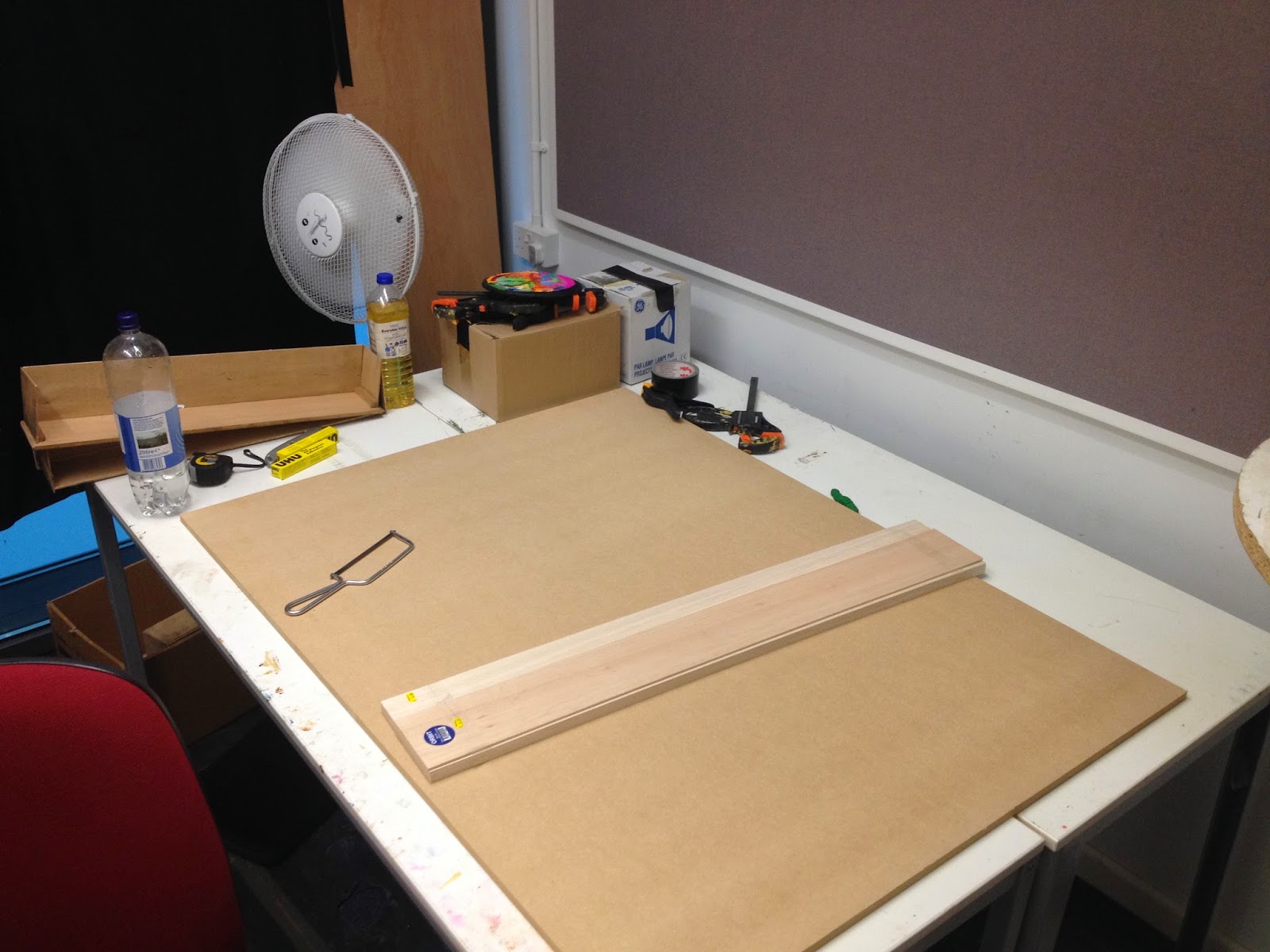 i'll tackle this one in a couple of parts, first off the floor! My interior set has wooden floorboards, I decided to make them out of balsa wood as they are easily drillable for tie downs, and easy to cut up into smaller scale appropriate pieces. 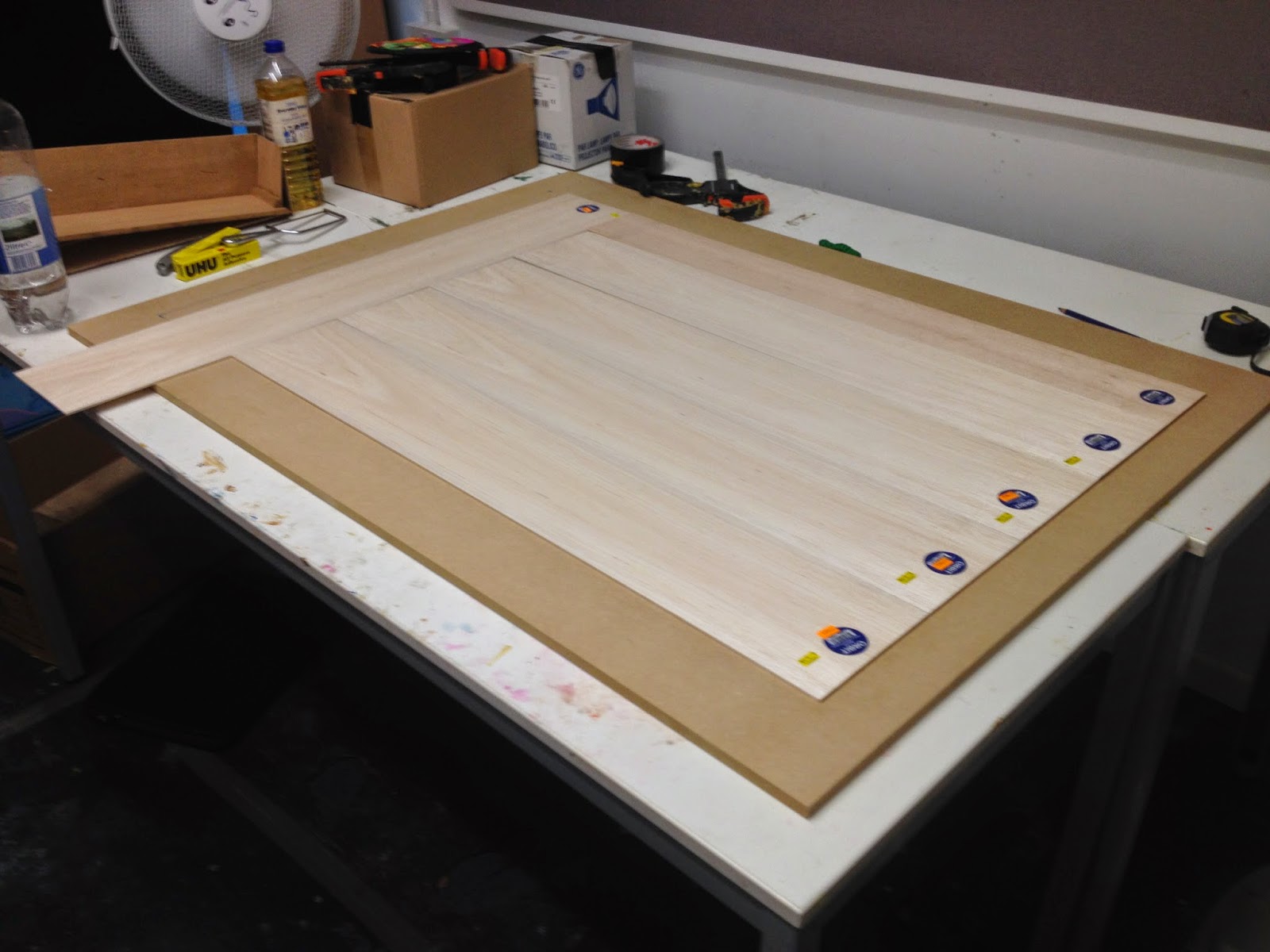 Before i bought the wood, i measured out the space i would need, and double checked by laying out the sheets to make sure that there was physically enough to cover the entire floor with a little extra on the edges. 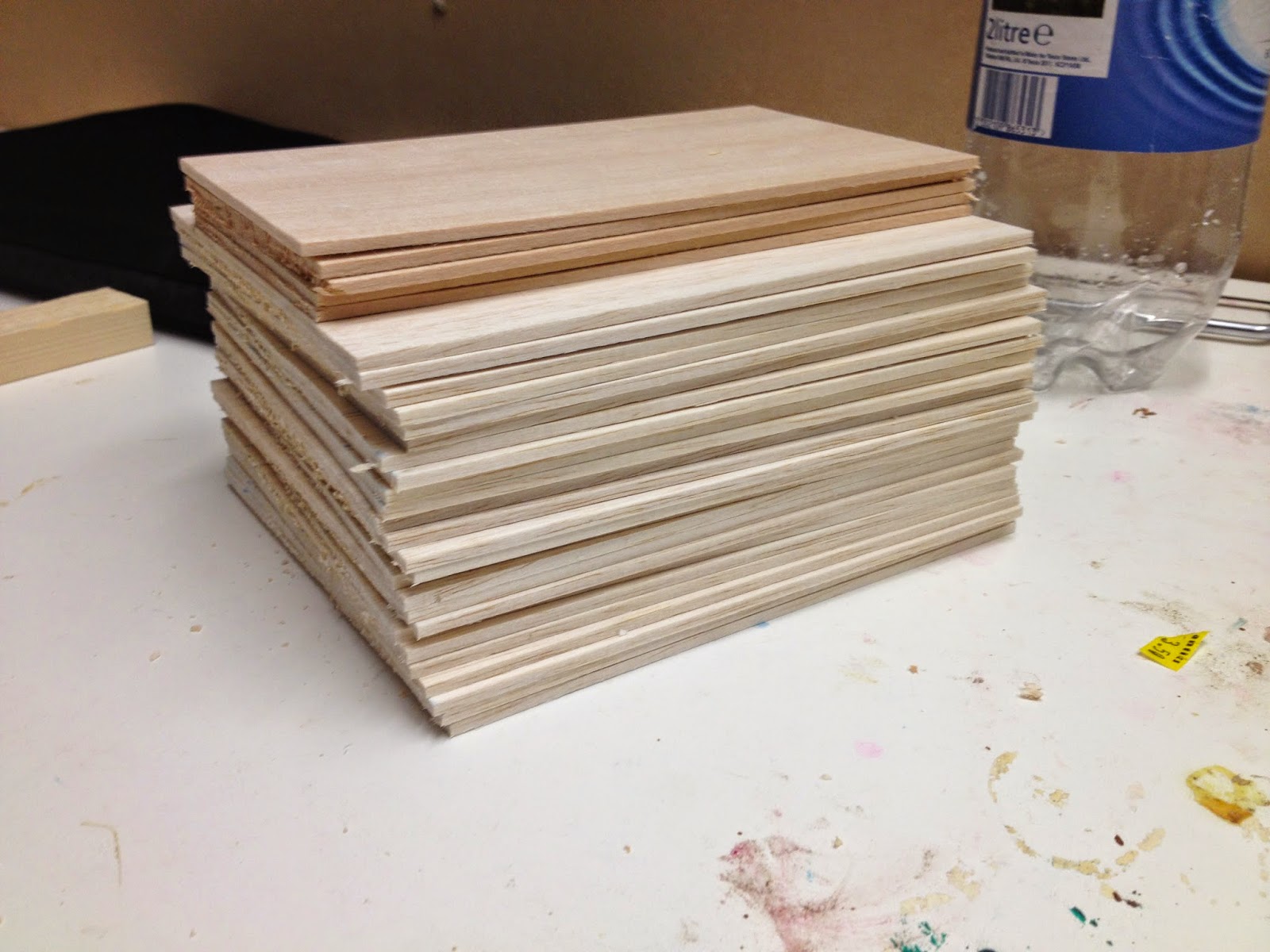 I then cut all of the pieces into equal parts, something like 150mm by 25mm (don't quote me on that) resulting in a stop motion timber yard. The only issue with this though is to get the randomly placed quality they were all too organised, I didn't want any two pieces of the same wood to be touching each other (within reason) 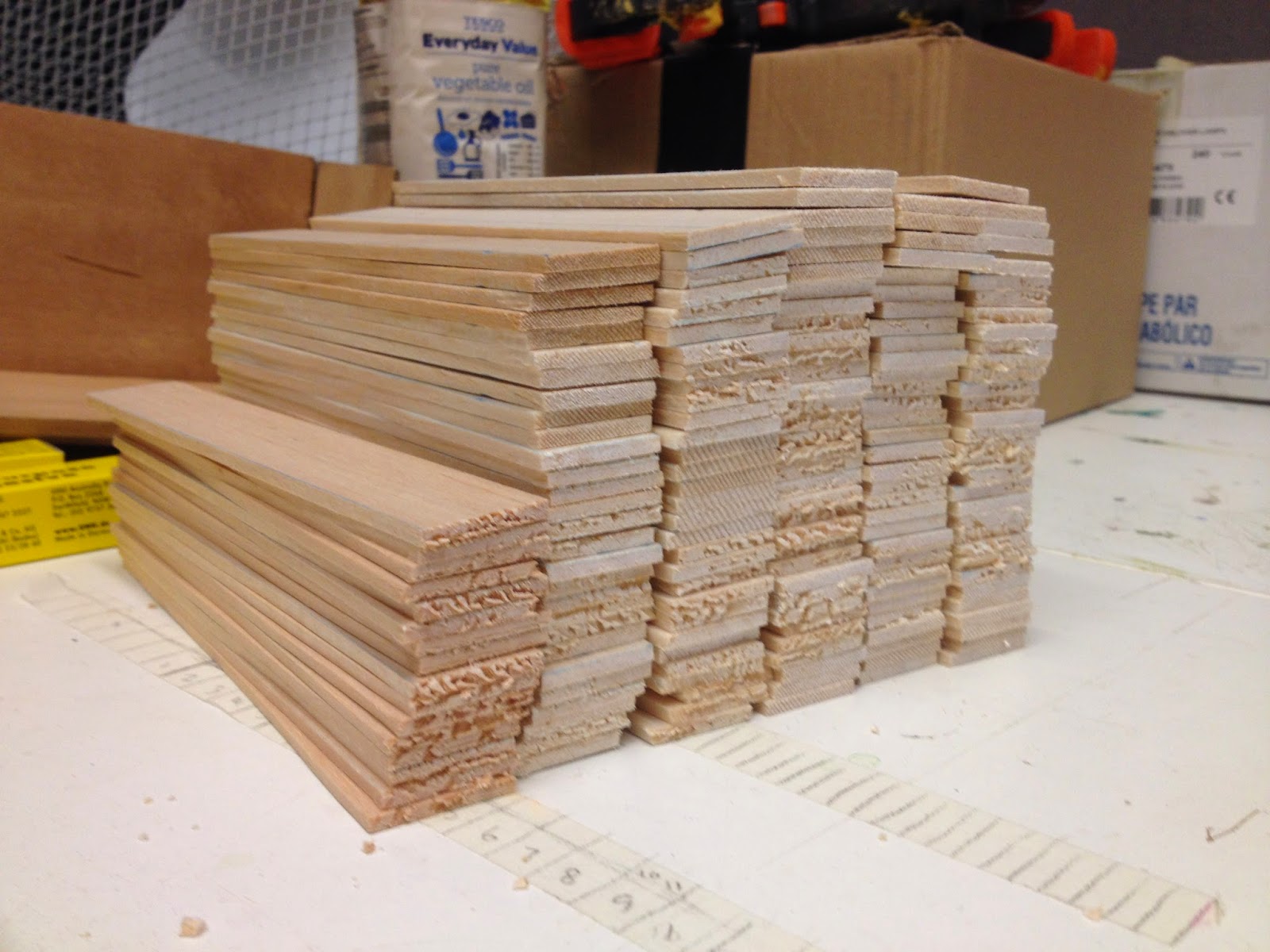 So i had a little jumble! and all was well. 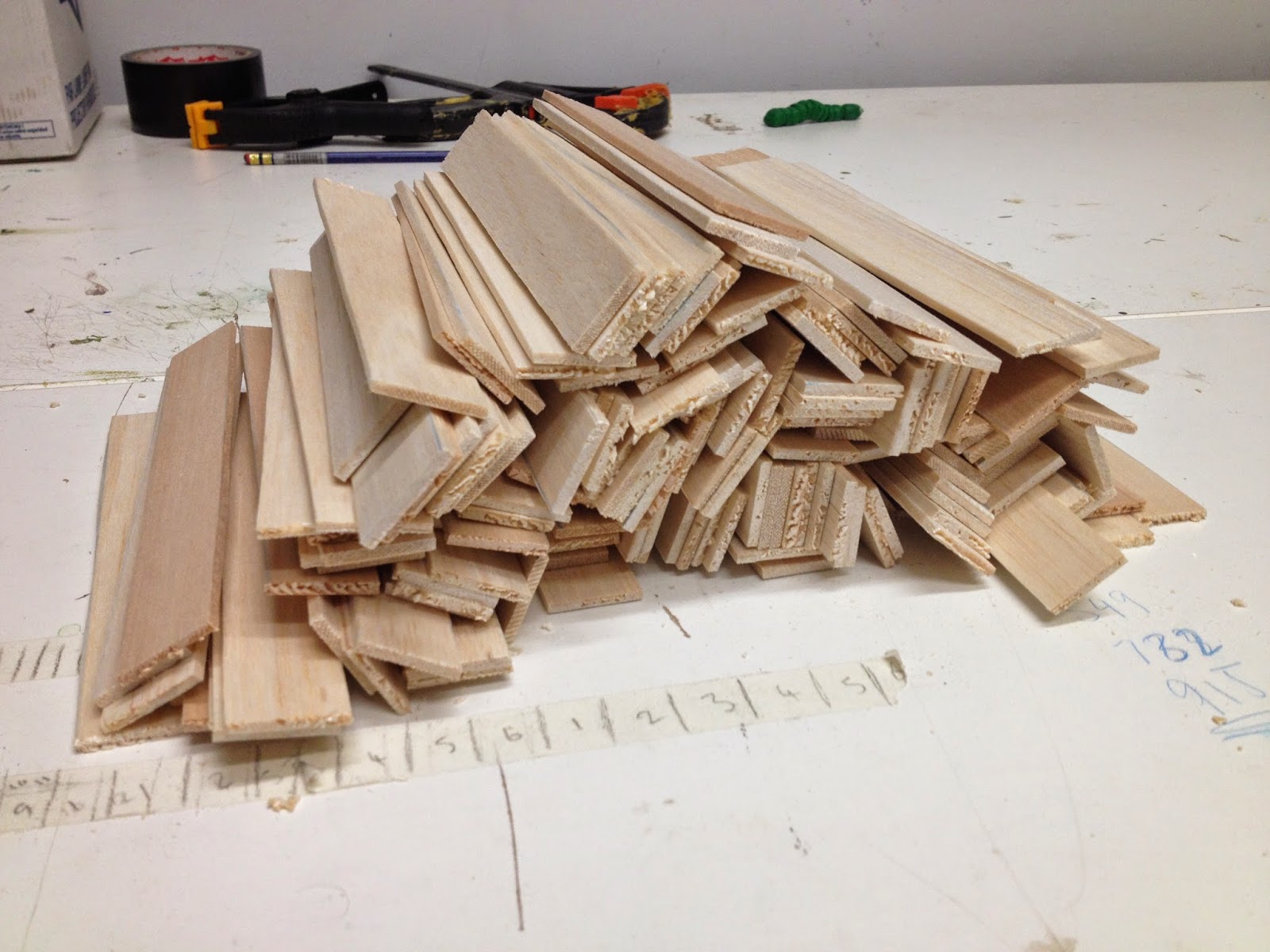 I then painted the base of the floor with a darker brown to the wood, this way if there were any gaps in the floorboards, it would look darker underneath. 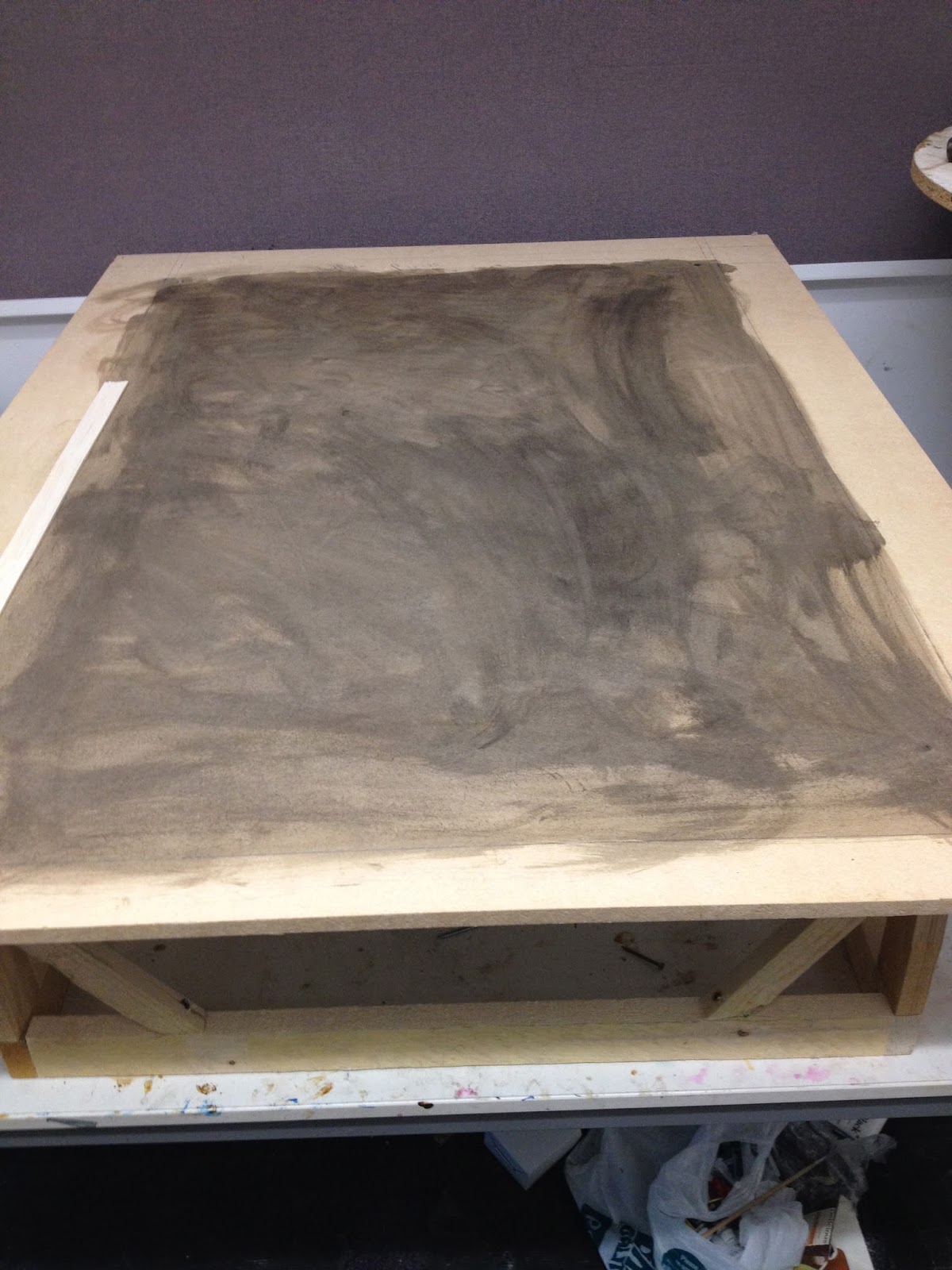 Then it was just an incredibly long saturday spent gluing and placing each individual floorboard, trying to get them as straight as possible. I think i went through about 4 tubes of UHU (in a well ventilated area of course). 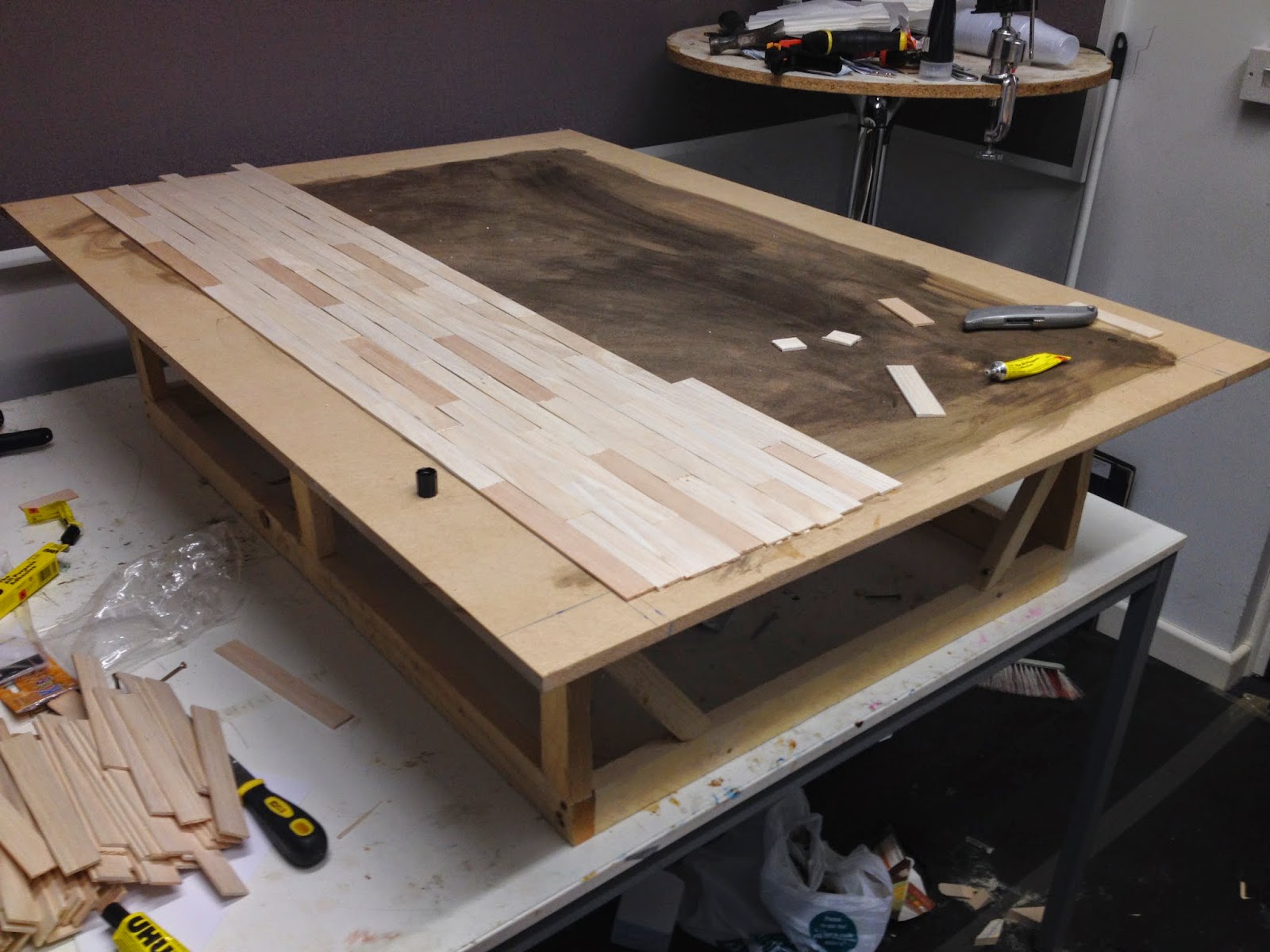 I then placed my props on there to get an idea of the final layout of the set. All looks a bit clean but I'm happy with them for now. 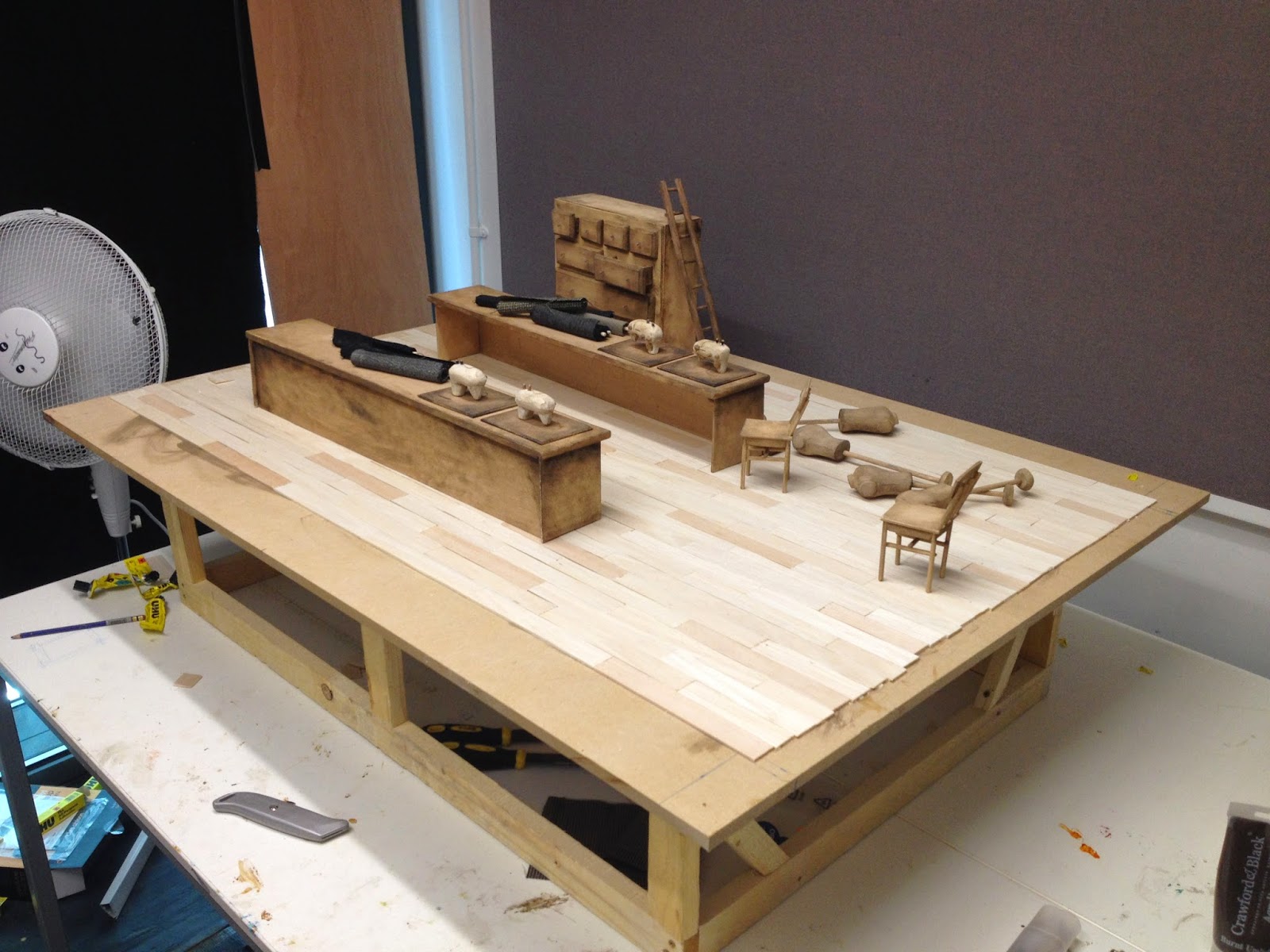 Posted by James Carlisle at 12:01 No comments:

as part of our business module we've had to put together a business card, CV, cover letter and ultimate image.

It was cutting it close but i managed to finish my set (i'll post about that this week) just in time to take the ultimate image below, also the image on the back of my business card.

Waiting to get feedback before i get them printed but fingers crossed it'll be something very similar. For some unknown reason the back of the business card is showing a lot lighter than the actual image, but this will be the same as below for the final. 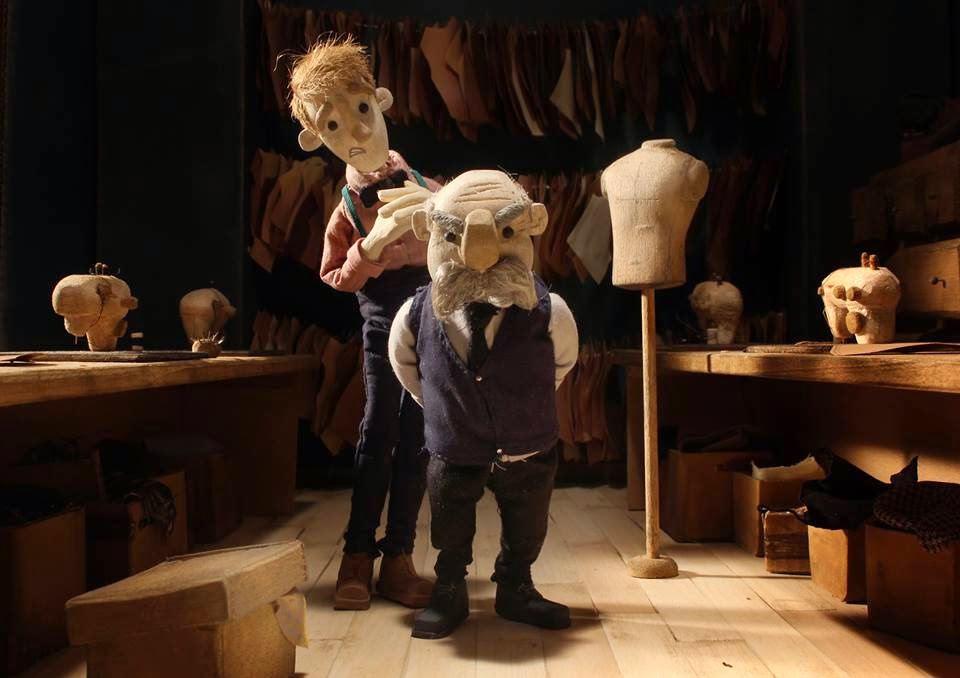 Posted by James Carlisle at 12:50 No comments: