I've done no animating in the last couple of weeks, but i did go to the Harry Potter experience in London earlier this week! WHICH WAS AMAZING. I would highly recommend it to any Harry Potter fan with 3 hours on their hands.

While in London I visited Savile Row, the old tailors street where they still make bespoke suits by hand (they're incredible). Long story short the part of the whole making process I love the most is the teeny tiny clothes. So my logical thinking is to make a film about making clothes. Massively inspired by a stop motion film called "The Maker", see the full film below, which is also insanely great and shows how cutting and sewing is possible in stop motion with a simple character (hands wise)

Anyway, while wandering down Savile Row, I walked past a young tailor on his break. He had a curly ginger moustache, pink stripy shirt, green braces, basically the character i needed for a potential film idea for my third year at Uni. Brainstorming on the coach back to Cardiff, my girlfriend and I came up with a scenario he could be in, involving an old tailor and a young tailor working in the same workshop.

Its in INCREDIBLY early stages at the minute as the first designs for Arthur my fisherman were nothing like the final puppet, and I could get back to Uni at the start of October and my tutors could completely shoot down the idea, but here is a couple of coloured photoshop characters just before i  forget what the young tailor looked like. 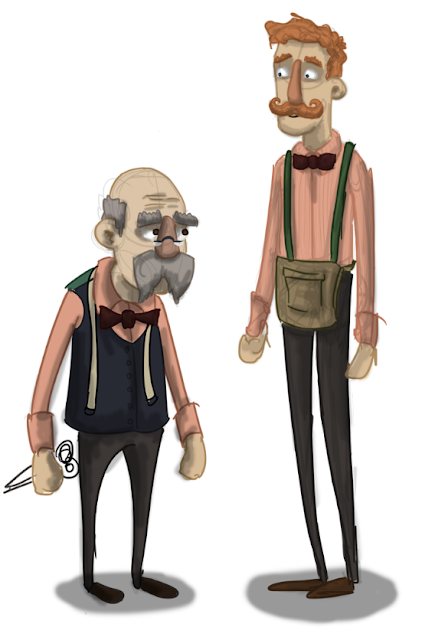 Anyone that's followed my other characters i've designed might notice that every single one has a moustache. i wasn't going to do one on this idea.... BUT i don't care. This one will hopefully be different because in my head I want the hair to be real/synthetic hair, not silicone or latex or anything because I want it all to have a real hand built quality to it.

after animating a walk last week, i started this week with the intention of doing a run, but I couldn't get the camera wide enough with the background I have to do a substantial run. And running on the spot was a nightmare, So with the help of Ben Whitehouse on the old twitter, I was sent a list of fun things to do as animation tests which was a god send! I also put together a showreel of stuff i have already, and from that found out what I don't have at all.

In my first year, we had to animate either a lift or throw, and a push or a pull. I animated a throw, which i kind of still like so there isn't much point re-animating one.

I started by making a miniature cardboard box, The cardboard was still too thick on the ends when it was made so i used hot glue to press together these bits.

Anyway, I seriously cannot stress block outs enough in animation. I had no reference videos for this lift so all of the movement came from a series of block outs as well as physically doing the action in the studio with a plastic box that was conveniently the perfect size! I have no idea what so ever how I animated my entire film this year with no block outs at all.

Also i've found its great to just animate what would actually be happening instead of worrying too much about how the individual frame looks. If you get the movement right, it SHOULD all work out! (don't quote me on that)

Without further ramblings, here is my weeks work, pretty happy with the outcome considering how i started.

Won't be animating next week because im going home for a week but i'll be back the following week.

Lift animation. Start to finish from james carlisle on Vimeo.
Posted by James Carlisle at 20:23 1 comment:

Walks have been developing nicely since the last post. Another video here just to show the last of the block outs before a couple of full animation tests shot on 2s.
Theres still a lot i want to change about it, the last walk repeated three times is the most recent/developed one.

I think, still undecided, that i'm going to leave the walk there for now, as theres always something to change. If anything, I wanted to exaggerate the twist on the shoulders more, bring the hand coming forward further up and maybe tone down the amount of head bob.

Once again any feedback positive or negative is much appreciated.

Posted by James Carlisle at 15:26 No comments:

its been far too long since i've animated anything and the big plan this summer was to go animation crazy with a basic armature. Its taken me a lot longer than i wanted to actually get started BUT i've finally got the ball rolling. As you can see in my previous post, i've bulked out the professional H1 armature from Malvern Armatures

And I figured what better place to start than with a walk cycle.
Generally horrible things consistency wise but to start i've only blocked him out. Using contact points, passing points and two inbetweeny bits i've got the following video.

My plan is that through summer I chuck practically everything i animate up here, no matter how bad, so that (fingers crossed) some sort of development can be seen.

Anyway, here are my tests from yesterday, just simple block out walks shot on 4s, just to try and get the general movement.

I could've done another test yesterday but went to see monsters university instead (great film) and wanted to take the sheet i was using as a back drop home to iron it.